The raging snowstorm just outside Perimeter Institute’s glass atrium reminds Dine Ousmane Samary that he is a long way from home.

Yet, sprinkled with chalk dust and scrawling equations on a blackboard, he also feels right at home.

As the inaugural recipient of the Fields-Perimeter Africa Postdoctoral Fellowship, Samary is making the most of a year-long opportunity to conduct the kind of research (in the kinds of research environments) he could scarcely have imagined during his formative years.

As a boy growing up in West Africa, Samary had a thirst for knowledge and understanding that was difficult to quench.

Even in Benin’s coastal capital city of Cotonou, where Samary lived and attended school, he faced an uphill struggle to satisfy his intellectual curiosity. Science education is not universally considered a priority in a country whose literacy rates are among the world’s lowest.

“In my country, science is not well developed,” recalls Samary, now 32 and tackling deep questions of quantum gravity, the field that seeks to unite quantum mechanics and general relativity. “The politicians say it is not important, so it is hard to explore science in my country. But I had good teachers who motivated me to pursue science.”

That motivation led Samary to a master’s degree and subsequent PhD from the Institute of Mathematics and Physics at Benin’s University of Abomey-Calavi. It was during a postdoctoral term there that Samary heard about the Fields-Perimeter Africa Postdoctoral Fellowship. He was overjoyed when he received word that he would become the program’s first fellow.

“I was very happy to be chosen,” says Samary, who moved with his wife and one-year-old son to Waterloo. “I love physics because of my curiosity to understand everything. Now I can do great science with excellent people.”

The fellowship, now accepting applications for its second term, gives African nationals who have recently earned PhDs in mathematics or theoretical physics the opportunity to conduct research and collaborate with scientists at both Perimeter Institute and The Fields Institute at the University of Toronto.

Samary’s research during the fellowship will investigate questions of tensorial group field theory, an approach to a background-independent theory of quantum gravity. He is in good company, as Perimeter is home to the world’s leading research efforts into quantum gravity, affording him opportunities to collaborate with faculty, fellow postdoctoral researchers, and students.

For Samary, the fellowship is an invaluable step in his scientific career, albeit one that requires adjustment to a chillier climate.

“It’s very different than Benin,” he says, looking through a window at the winter storm. Then, returning to the equations on the blackboard, he adds, “But it’s nice in here.” 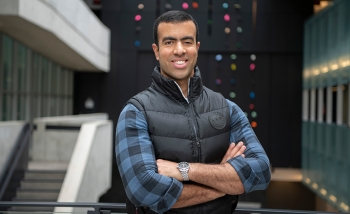