When Ali Assem Mahmoud arrived in Waterloo after a more than 9,000 kilometre journey from his home in Cairo, Egypt, in 2017, he became one of the tiny handful of African graduate students studying mathematics and physics in Canada.

That turned out to be a learning curve, not only academically but also in terms of culture.

“It wasn’t that easy at the beginning,” says Mahmoud. But it was worth it, he says, because it helped him diversify his world view. In turn, that will help as he teaches increasingly diverse student populations. “I learned a lot about other cultures, and that will be reflected in everything I do.”

The purpose of the fellowship is to support African nationals who are postdoctoral researchers or recent PhD graduates working in mathematical sciences or theoretical physics. The fellowship enhances their careers by supporting their postgraduate training and giving them a chance to work closely with mathematics and physics researchers in Canada. Ultimately, the program aims to advance science in Africa and the world.

Since 2014, the program has supported eight early career African researchers. Mahmoud was one of two researchers supported this year. The other researcher, Kennedy Obinna Idu, has been based at the Fields Institute. Originally from Nigeria, he completed his PhD at the University of Pisa in Italy.

This year, the three institutions agreed to extend the partnership for another five years, into 2027, and will support two one-year postdoctoral fellows per year. The fellows can be based at either Fields or Perimeter but are encouraged to spend some time at both institutions.

The postdocs will also help train master’s students from the AIMS centres through seminars, lectures, and mentoring.

“Perimeter is highly regarded as a scientific institute, and this position will help me to apply to more permanent positions as an academic,” Mahmoud says.

Seth Asante, who was the Fields-AIMS-Perimeter Postdoctoral Fellow in 2020-21 and is now a postdoctoral researcher at Friedrich Schiller University in Jena, Germany, adds that having a diversity of perspectives is important to global science.

“It is so easy to be fixed in one perspective and not look elsewhere,” Asante says. “In science, there can be so many different faces of a problem, but if we can look at it from different angles, the problem could be solved.”

While he was at Perimeter, Asante worked closely with Faculty member Bianca Dittrich, an eminent quantum gravity researcher, and together they achieved an important advance in the quest to understand spacetime and gravity at the smallest scales. Asante and Dittrich still collaborate.

Paul Smith, Managing Director and Chief Operating Officer at Perimeter, said that in a world where institutions are often competing with one another, this trilateral agreement is all about sharing for the benefit of everyone involved.

“We commit to hiring a certain number of postdocs and sharing them between the institutes. That enables these researchers to find more collaborators, develop new skill sets, and see what renowned institutes are doing in Canada,” Smith says.

They will go on to mentor other postdoctoral researchers and teach graduate students of their own, he adds. And the collaborations will continue long after the postdoc position ends. “It is not a one-way street, and hopefully they will build lasting relationships,” Smith says.

The agreement benefits African nations through the training of scholars who may go on to make contributions back in their home countries, says Mama Foupouagnigni, Chief Academic Officer at AIMS.

“Our renewed trilateral partnership with Fields and Perimeter Institutes will provide AIMS alumni and other African scholars a coveted opportunity to pursue postdoctoral roles at these two prestigious institutes. In addition, they will get to contribute to the work we do at AIMS by spending two months at an AIMS Centre and contribute to the training of our master’s students,” Foupouagnigni says. AIMS sets up the alumni training for the postdocs chosen under the partnership.

Smith adds that it is also important to diversify the physics community here in Canada.

A recent survey by the Canadian Association of Physicists found that Black people are significantly under-represented in physics, from student to faculty levels. These fellowships can play a role in changing this. Seeing more successful Black scientists as role models is essential to inspiring a new, more diverse generation of talent, Smith says.

Having young African scientists work alongside researchers from dozens of countries enhances Perimeter’s research as well as its culture, he adds: “It is important for Perimeter as an institution, because we can learn from all the different ways of working and thinking and living.”

Ultimately, it is good for global science, Smith says.

“Innovation and science progress isn’t confined to Canada. We need to have this international base so that other countries can develop their own students as well, because one of them might be the next Einstein.” 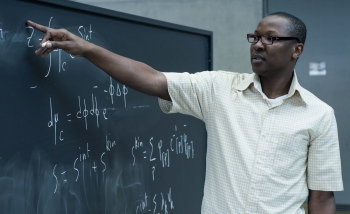