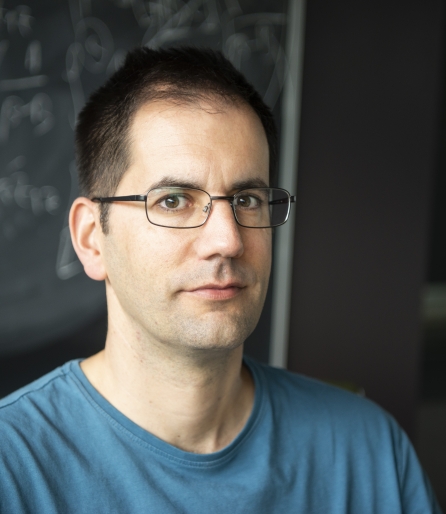 QUANTUM MECHANICS OF MANY-BODY SYSTEMS Consider the quantum many-body problem: given a large number of quantum mechanical degrees of freedom, such as quantum spins or electrons, and a detailed description of their interactions, can we predict their emergent, collective behavior? This question is relevant to a number of research areas, from condensed matter to statistical mechanics or quantum chemistry, from quantum information to string theory and quantum gravity. ENTANGLEMENT. A fruitful strategy to understand many-body wave-functions is to study their entanglement. In the ground state of a local Hamiltonian, the entanglement entropy typically obeys an area law, indicating that the wave-function is only weakly entangled. THE RENORMALIZATION GROUP (RG). The RG aims to produce a sequence of effective descriptions of the many-body system, corresponding to increasing length scales. This sequence eventually converges to some RG fixed point that retains the universal properties of the phase or phase transition of the original many-body system. ENTANGLEMENT RENORMALIZATION. It turns out that the key to building a proper RG flow for quantum systems (in real space, as opposed to momentum space) is the careful removal of short-range entanglement during the coarse-graining step. Such an RG produces the multi-scale entanglement renormalization ansatz (MERA). TENSOR NETWORKS. The MERA is a tensor network that exploits the spatial structure of entanglement to produce an efficient (i.e., computationally tractable) description of ground states, even at a quantum critical point. It is particularly suited to describe the ground state of a conformal field theory (CFT) on the lattice. More generally, other tensor network states, such as matrix product states (MPS) and projected entangled-pair states (PEPS), also offer efficient descriptions of quantum many-body states, including systems with topological order. HOLOGRAPHY. The MERA for a system in D spatial dimensions is a tensor network in D+1 dimensions, with the additional dimension corresponding to the RG flow / length scale. As a result, it is regarded as a discrete realization of the AdS/CFT correspondence, which establishes a duality between a CFT and a theory of quantum gravity defined in one additional space-time dimension. QUANTUM FIELD THEORY (QFT). The continuous version of tensor networks such as MPS, MERA, or PEPS apply to systems in the continuum, as opposed to the lattice, and aim to produce novel non-perturbative methods for QFT.