account_circle By Stephanie Keating
This summer, 20 of the world’s top undergraduate students stepped out of the classroom and up to the chalkboards as part of the inaugural Undergraduate Theoretical Physics Summer Program at Perimeter Institute.
September 4, 2019

Gebremedhin Dagnew was constantly tinkering and experimenting as a child. Growing up in Bahir Dar, Ethiopia, he would often take things apart to see how they worked (sometimes blowing the house’s power in the process). But it wasn’t enough to know that putting things together in the wrong configuration could cause an explosion — Dagnew needed to know why things exploded at all.

Physics was the only field that seemed to offer an outlet for Dagnew’s relentless curiosity.

“I want to pursue theoretical physics because that’s the area that really gets to ask the meaningful and deep questions,” he said. “I can get to ask ‘why?’ instead of ‘how?’. I can be the pioneer of an idea — whether it’s right or wrong.”

Now 23 years old and a student at Middlebury College in Vermont, Dagnew is on his way to doing just that. He was one of 20 students chosen to participate in the first Undergraduate Theoretical Physics Summer Program at Perimeter Institute, designed to give budding physicists an opportunity to try out the research experience.

The program invites students in their final year of an undergraduate degree to visit Perimeter for two weeks in May, where they take in lectures from leading thinkers in theoretical physics and work together in small groups to grapple with real research problems. For ten of the students, that invitation extends beyond the summer, enabling them to work as assistants with Perimeter researchers.

It was supposed to be a side journey for Alicia Lima, 22, who recently wrapped up a degree in physics and mathematics at Bowdoin College in Maine. But just one week into the summer program, Lima scrapped her plan to study at Cambridge and opted to stay for the Perimeter Scholars International master’s program.

“It actually shaped my future for the whole year,” she said.

Lima was thrilled to find a place where she could dive deeply into her passion for mathematical physics. “The more I do mathematics and see how it played a big role in physics makes me see that that’s the path I want to take,” said Lima.

“The most interesting and unexpected thing was when Neil Turok came to give us a presentation. He told us to question the principles, and not just follow the physics that’s out there,” she said. “That’s not the advice I got from my previous mentors.”

The student projects spanned a broad cross-section of topics in physics, from the largest to the smallest scales.

“This is a really good program to learn about what you’re interested in and to get some hands-on experience,” said Anya Forestell, a 22-year-old from Fredericton, New Brunswick, who is currently studying physics and astronomy at the University of Waterloo. “There’s such a diversity of physics going on here.”

Forestell’s group took a journey through the history of the cosmos. “We decided to learn a bunch of stuff about cosmology and figure out, based on what we know, what are the valid questions that we can ask, and then how do we answer them?”

What they discovered surprised her. “I never thought that you can just calculate the age of the universe in just a few simple lines,” she said. “Once you know the math, then it’s pretty easy to get pretty close answers to how old the universe is and how big it is.”

Nicolas Valdes went in a different direction, studying physics on the tiniest scales. Valdes, a 22-year-old physics major at the University of Chile, chose a project that focused on the concept of coherence in quantum mechanics. “That’s a quantity that we care about because it’s useful for quantum computing,” he explained.

Valdes decided to apply to the inaugural program after three professors independently told him about it. He appreciated the opportunity to work on a project that could have real-world applications in the near future. “It was just the perfect difficulty, I think, to attack it in a week,” he said.

But the best aspect was being able to collaborate and problem-solve as a team – a process that is integral to the scientific method.

“It was surprisingly efficient,” Valdes said. “When somebody got stuck on one problem, all the others were able to help, and then we could discuss. Everyone learned, I think, from every little question.”

Dagnew said his summer at Perimeter has not only broadened his knowledge within the field but also made his path clear.

“This is a place where people can actually think freely,” Dagnew said. “In my first week here, I got exposed to some quantum information, some numerical methods. I got exposed to path integrals – things I would never know right now.”

“It’s a validation for myself that I do want to pursue research and that I want to continue my graduate studies in physics.” 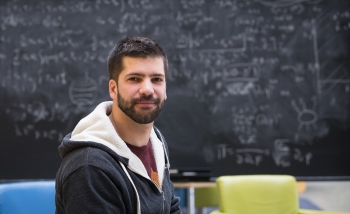 Gebremedhin Dagnew finds the spark of joy in physics 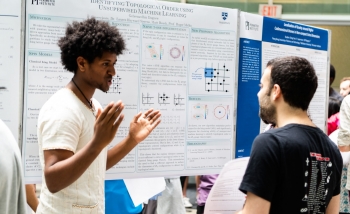 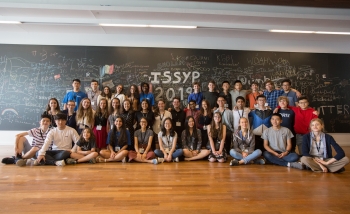