The Buchalter Cosmology Prize has been awarded to Perimeter Institute Faculty member Lee Smolin and Marina Cortês (University of Edinburgh) for their work on causality and time.

Two additional Perimeter scientists, Luis Lehner and Matthew Johnson (jointly appointed with York University), were among the winners of the third place Buchalter Prize for their paper, “Simulating the universe(s): from cosmic bubble collisions to cosmological observables with numerical relativity.”

Perimeter Director Neil Turok commented, “It is great to see foundational thinking encouraged in this way, and we are delighted that Perimeter scientists won first and third prizes. Lee and Marina have set out to provide radical new foundations for cosmology and for quantum theory. I hope this prize will encourage them to elaborate the approach.”

The Buchalter Prize was created “to stimulate groundbreaking theoretical, observational, or experimental work in cosmology that challenges, extends, or illuminates current models and/or helps explain the cosmic expansion from first principles.”

In the paper for which they won the first prize, “The Universe as a Process of Unique Events,” which was published in Physical Review D, Cortês and Smolin propose a new framework for cosmology which they call “energetic causal sets.” The collaboration began when Cortês was a visiting researcher at Perimeter.

The authors begin from the hypothesis that time is both fundamental and irreversible – a bold assertion, given that most physicists see time as a property that “emerges” as a consequence of more fundamental physical laws. Causality results directly from this irreversibility; the future is created continuously out of the present through the activity of time. Energy and momentum are likewise fundamental properties; spacetime, and particles moving within it, emerges through the activity of time – again, in diametric contrast to prevailing views. Every event has a unique “fingerprint” – the signature sum of the events that preceded it and no others.

These fundamentals result in a universe that is as asymmetric as possible. The authors develop their theory analytically, illustrating it through numerical simulations of a simplified model of a universe in which space has only a single dimension.

In two subsequent companion papers, the authors elaborate on the assertions presented in the first paper, develop a quantum version of the energetic causal sets framework, and link it to a pre-existing approach to merging quantum mechanics and spacetime, called loop quantum gravity.

The new framework holds key implications for fundamental physics – indeed, the authors argue that the primacy of time, and its irreversibility, must be incorporated into contemporary physics in order to make progress on key questions that beset the field. The authors believe that, ultimately, it may point the way to a unification of quantum mechanics with relativity – the “Holy Grail” of contemporary theoretical physics.

“This particular work is special, as it was challenging and uncompromising in setting a new direction,” Cortês said. “It took courage and determination to publish it, so to see it recognized is a reward beyond imagination.”

Smolin added, “It is very humbling and unexpected to receive the inaugural Buchalter Prize for this risky work, in which we set aside long-established frameworks to start afresh to formulate an approach to the deep problems that face cosmology from first principles.” 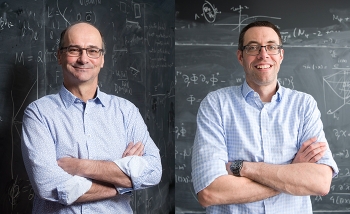