There are few things more challenging – or rewarding – than probing the inner workings of the atomic nucleus. Perimeter Faculty member Davide Gaiotto has been named one of 13 principal investigators studying this fundamental topic as part of the new Simons Collaboration on Confinement and QCD Strings.

Led by Igor Klebanov of Princeton University, and funded by the Simons Foundation, the ambitious new collaboration is designed to advance our understanding of a key area of high energy physics called quantum chromodynamics (QCD).

Since it was first theorized over 50 years ago, QCD has proved to be a wildly successful description of the strong nuclear force. According to the Standard Model of particle physics, the strong force explains the structure of hadron particles, which make up most of the ‘ordinary matter’ in the universe. It provides an explanation for how protons and neutrons are bound within atomic nuclei, as well as how quarks and gluons are confined inside protons and neutrons. It is considered one of the hardest parts of the Standard Model to study, because every process in QCD involves the contribution of an arbitrarily large number of particles, which pop in and out of existence.

“The collaboration offers a venue to compare different perspectives on the problem and to formulate novel questions,” says Gaiotto, who holds the Krembil Galileo Galilei Chair at Perimeter. “Scientific progress often involves a tension between studying a particular topic in great depth and catching connections between naively unrelated topics which reveal completely new potential approaches to a problem. The collaboration aims to trigger such a moment of synthesis.”

There are still many unanswered questions about exactly how confinement works. The new Simons Collaboration has its sights set on answering them, describing QCD’s confinement theory as “an unsolved problem of fundamental importance in physics.” Involving researchers from 13 institutions in six countries, the collaboration is funded for four years, with plans for a kick-off meeting in September 2022.

Just as electromagnetic particles like electrons have an intrinsic property called charge (positive and negative), quarks and gluons have a property called colour (red, blue, and green). One of the interesting results of QCD is that the strong force ‘confines’ coloured particles like quarks within hadrons – they cannot ‘escape’ to be observed on their own.

The farther apart the quarks are pulled, the stronger the force confining them becomes. While confined, however, the force weakens, and the quarks can move about freely. This scenario is often imagined as a stretchy, elastic bag full of tennis balls: the balls can roll around unimpeded inside the bag but cannot escape through the sides of the bag.

The confinement process leads to some weird mathematical oddities, including something called the ‘mass gap,’ in which quantum particles that have no mass and can travel at the speed of light clump together irreversibly into massive particles. This process cannot be analyzed with current theoretical tools, yet it seems to have been demonstrated via experiment and in computer simulations of QCD, posing an ongoing mystery in quantum physics. Finding a coherent mathematical proof for the mass gap would be a big step forward, and it is at the top of the Clay Mathematics Institute’s Millennium Problems list as one of several highly sought-after answers yet to be found. The new Simons Collaboration will renew efforts to solve the mass gap puzzle.

Within this framework, the collaborators will also explore the dynamics of QCD strings. Sometimes called chromoelectric flux tubes, these strings connect quarks with anti-quarks. The collaboration plans to take advantage of recent advances in computer modelling to better understand these strings.

Gaiotto hopes the collaboration will also enable progress in quantum field theory. “A lot of the work on confinement aims to make contact with the specific theory of quarks and gluons which appear in our world,” he says. “I would like to ask questions about problems in quantum field theory which would not necessarily be found in the real world, but can teach us more general lessons which could later on be specialized to the real world.”

The collaboration is part of the broader Simons Collaborations in Mathematics and the Physical Sciences program, which aims “to stimulate progress on fundamental scientific questions of major importance in mathematics, theoretical physics and theoretical computer science.” 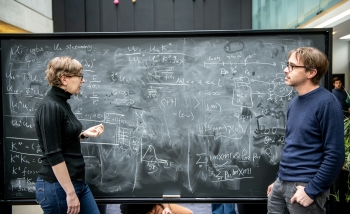 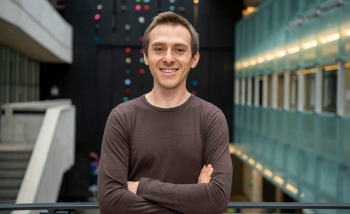