The coursework is divided into two overlapping phases and a short research project in the form of an essay.

Each student undertakes a short research project supervised by a local or outside faculty member and produces an essay which is publicly presented and defended.

The program also includes remedial English courses, training in science communication, and presentation workshops. Below is an example of a schedule from the year 2022/2023. It is subject to change each year to accommodate the needs of students. 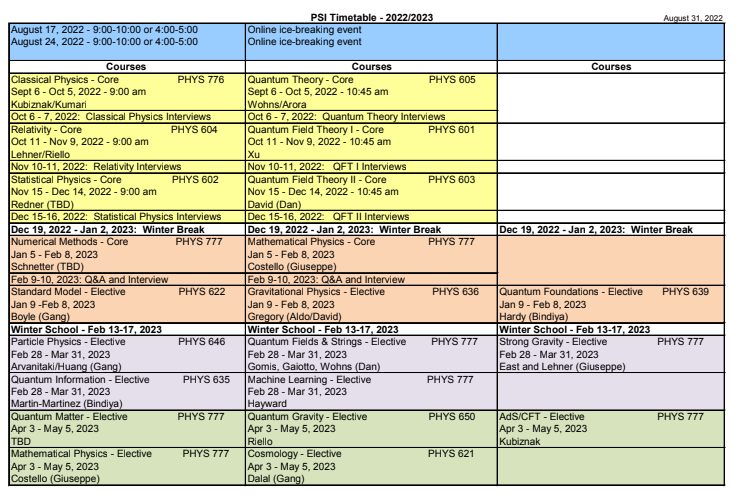 Although all course grades are either "credit" or "no credit," PSI's approach to evaluation involves assessment throughout the year conducted by academic staff. This assessment is in the form of oral interviews (for core courses), homework assignments, and contributions to tutorials. The goal is to encourage all students to achieve their potential and to avoid grade-chasing competition.

September to January. The core courses cover foundational graduate-level subjects, and each course is five weeks long. Students take 7 out of the 8 core courses. The following are the descriptions of recent iterations of the core courses. Note that the courses and their topics are subject to change and may not fully reflect the content of the upcoming year.

This course aims to review the basics of theoretical mechanics, special relativity, and classical field theory, with the emphasis on geometrical notions and relativistic formalism.

This course on quantum mechanics is divided in two parts:

The second part of the course is an introduction to scalar quantum field theory. The Feynman diagram technique for perturbation theory is developed and applied to the scattering of relativistic particles. Renormalization is briefly discussed.

The course starts by looking for a quantum theory that is compatible with special relativity, without assuming fields are fundamental. Nevertheless fields turn out to be a very good, maybe inevitable mathematical tool for formulating and studying such a relativistic quantum theory. The second part of the course introduces the Dirac theory and canonically quantizes it. It also quantizes the Maxwell field theory. The Feynman diagram technique for perturbation theory is developed and applied to the scattering of relativistic fermions and photons. Renormalization of quantum electrodynamics is done to one-loop order.

This is an introductory course on general relativity (GR). We shall cover the basics of differential geometry and its applications to Einstein’s theory of gravity. The plan is to discuss black holes, gravitational waves, and observational evidence for GR, as well as to cover some of the more advanced topics.

The course has three parts. In the first part of the course, the path integral formulation of non-relativistic quantum mechanics and the functional integral formulation of quantum field theory are developed. The second part of the course covers renormalization and the renormalization group. Finally, non-abelian gauge theories are quantized using functional integral techniques.

January to April. Elective courses introduce students to modern topics and cover cutting-edge research topics from various specialized subfields. Students take at least six courses. The total number of elective courses changes each year, and is generally between twelve and fifteen. Each course is five weeks long. The following are the descriptions of elective courses from recent years. Note that the courses and their topics are subject to change and may not fully reflect the content of the upcoming year.

Recent courses and topics include:

The problem with the "textbook interpretation" of quantum mechanics. Operationalism vs. realism. The quantum measurement problem and a classification of research programs in terms of their proposed solution to it. Formulating quantum theory as an operational theory: density operators, positive operator-valued measures, completely positive trace-preserving maps, purification, Naimark extension, Stinespring dilation. Operational axiomatizations of quantum theory. Hidden variable models and the distinction between psi-ontic and psi-epistemic models. Hidden variable models based on an epistemic restriction. Bell’s theorem and locality. The Kochen-Specker theorem and noncontextuality. The deBroglie-Bohm interpretation. Dynamical Collapse Theories. The Everett Interpretation.

The main objective of this course is to discuss some advanced topics in gravitational physics and its applications to high energy physics. Necessary mathematical tools will be introduced on the way.

Machine Learning for Many Body Physics

This course is designed to introduce machine learning techniques for studying classical and quantum many-body problems encountered in quantum matter, quantum information, and related fields of physics. Lectures will emphasize relationships between statistical physics and machine learning. Tutorials and homework assignments will focus on developing programming skills for machine learning using Python. Students will be introduced to topics such as training techniques for supervised learning, feedforward neural networks, convolutional neural networks, unsupervised learning for data visualization and clustering, and research frontiers at the intersection of physics and machine learning. generative modelling.

What is RQI? Research topics in RQI. Measuring quantum fields; The measurement problem and relativity. What is a particle detector? The light-matter interaction form first principles. Unruh-DeWitt detectors; practical quantum information on QFTs. Relativity, covariance and quantum optics; A critical view on the single-mode and rotating wave approximations. Measuring vacuum fluctuations. Non-inertial particle detectors and qubits in curved spacetimes. The Unruh effect: Original derivation with quantum information perspective. Thermality. Gibbs vs KMS. When Gibbs is not enough: The KMS condition in QFT. Thermalization of accelerated particle detectors: The Unruh effect, modern derivation. Entanglement structure of a QFT. Introduction to entanglement harvesting from the vacuum. Quantum Energy Teleportation and violation of energy conditions.

We are now accepting applications for the 2023/2024 Perimeter Scholars International (PSI) program.